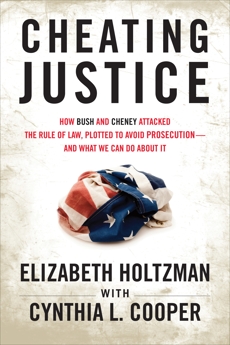 Cheating Justice: How Bush and Cheney Attacked the Rule of Law and Plotted to Avoid Prosecution- and What We Can Do about It

Synopsis: President George W. Bush and Vice President Cheney deceived Congress and the people to drive us into a war in Iraq; they claimed the right to wiretap illegally and to eavesdrop on citizens; and they authorized torture, unilaterally upending laws and violating international treaty obligations. Yet, both Bush and Cheney are audaciously unapologetic about their crimes. In his recent memoir, President Bush makes no apologies for his decision to start a war in Iraq, though no weapons of mass destruction, the ostensible reason for the war, were found there. Regarding his approval of the waterboarding form of torture, he proudly said, "Damn right."

Time and again throughout his term, President Bush proclaimed sternly "we do not torture." However, the 2009 release of secret torture documents revealed otherwise. The documents paint a bleak picture of the involvement of President Bush, Vice President Cheney, and top administration officials in unleashing, sanctioning, and conspiring in the infliction of torture. Holtzman and Cooper cite unlawful torture as only one of the many ways that the Bush-Cheney administration transgressed the law, trampled the Constitution, and harmed the image of the United States around the world. Bush and Cheney, the authors argue, authorized and condoned behavior and practices that starkly violate human-rights principles and the rights of American citizens. Congress chose not to pursue impeachment, despite multitudes of citizens advocating for it, Holtzman and Cooper among them. New revelations, however, about the extent and depth of their crimes make the need for accountability imperative.

Holtzman posits that the failure to indict, prosecute, or hold accountable officials at the highest level makes a mockery of U.S. law and sets frightening precedents. With Holtzman's legal expertise and Cooper's bold journalism, Cheating Justice explains why the nation needs to address the Bush-Cheney administration's abuse of power and manipulation of the law.

As a member of Congress and part of the committee that investigated and held hearings on the conduct of President Richard Nixon in the Watergate scandal, Elizabeth Holtzman balks at Bush's echo of Nixon's claim that he was acting in the interest of national security. Using Watergate-era reforms as a model, Holtzman details the steps necessary to undo the damage that the Bush-Cheney administration inflicted and explains how we can establish new protections that will block future presidents from similarly abusing the law. Cheating Justice is a call to empower the American people, and a firm insistence that the nation's leaders are not above the law.