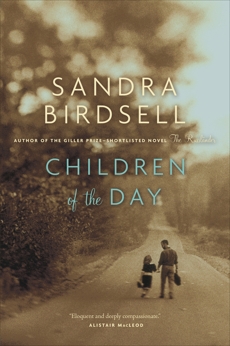 Children of the Day

Synopsis: Children of the Day opens on a June morning in 1953, when Sara Vandal, convinced that her husband has been having a decades-long affair, decides that she is too sick to get out of bed. With ten children in the house (and a possible eleventh on the way), this decision sets off a day of chaos, reflection and near disaster for the Vandal family.

Sara’s husband, Oliver, heads to the town hotel and bar in Union Plains, Manitoba, where he has been the manager for the past twenty years–a position he suspects he’ll no longer have by the end of the day. In an attempt to avoid the unavoidable, Oliver decides instead to pay a visit to Alice Bouchard, his childhood sweetheart across the river.
Throughout the day, both Oliver and Sara reflect on how their lives collided – a car accident that brought them together and tore them from the futures their families expected of them. Sara (from Sandra Birdsell’s previous novel, The Russländer) recalls her life in the big city of Winnipeg in the 1930s – a young Russian Mennonite woman lucky enough to escape the shackles of her overbearing culture. Oliver remembers his wedding day photograph–his the only Métis face in a crowd of Mennonites–and the precise moment when he suddenly grasped the enormity of his decision to “do the right thing.”

The Vandal children, too, must deal with this unusual disruption of their daily routine. Alvina, the oldest, secretly handles the stress of her family, her plan to escape them all, and her discovery of the world’s evil in the only way she knows how. Emilie worries about losing her happy-go-lucky father while facing the town’s heretofore hidden racism head-on. The boys live up to their family name by recklessly taking chances and literally playing with fire. And since her mother won’t come out of her bedroom, Ruby, just a little girl herself, must take charge of the babies with danger lurking in every corner.

By nightfall the extended Vandal family will be thrown together to work out the problems of the past and exorcise the ghosts that haunt them, which have all, in their own way, set this June day’s events in motion.