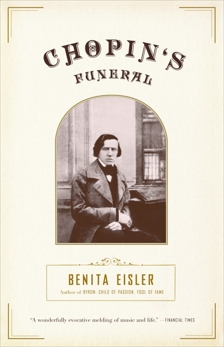 Synopsis: Frédéric Chopin’s reputation as one of the Great Romantics endures, but as Benita Eisler reveals in her elegant and elegiac biography, the man was more complicated than his iconic image.

A classicist, conservative, and dandy who relished his conquest of Parisian society, the Polish émigré was for a while blessed with genius, acclaim, and the love of Europe’s most infamous woman writer, George Sand. But by the age of 39, the man whose brilliant compositions had thrilled audiences in the most fashionable salons lay dying of consumption, penniless and abandoned by his lover. In the fall of 1849, his lavish funeral was attended by thousands—but not by George Sand.

In this intimate portrait of an embattled man, Eisler tells the story of a turbulent love affair, of pain and loss redeemed by art, and of worlds—both private and public—convulsed by momentous change.