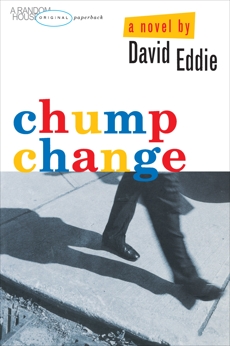 Synopsis: Of course, working at the Cosmodemonic Broadcasting Corporation as a news writer is not David Henry's first choice for employment. But circumstances conspire against him--his parents won't lend him money, girls won't talk to him at parties, magazines won't pay him enough, and the rent is due.

Feeling out of touch with his times--"Frankly, the 20th Century scares the shit out of me"--David Henry is often caught daydreaming, drink in hand, head in the clouds, wishing he were somewhere else. Sandwiched between Gen X and the Boomers, his is not the media's generation of choice, but rather a sensitive, desperate lot who see TV as the enemy, and Madonna as, well, just plain frightening.

But David Henry, hounded by a pack of vicious creditors, needs cash and needs it quickly. If there is a way to get it (legally) without a job, he'll do it. The next best thing is the Cosmodemonic hamsterwheel, a government-owned network chock-full of overpaid louts with their snouts in the trough. Not that he has any problem with that... "Government fat tastes just like chicken," says Mr. Henry--but there is always a downside to a Faustian pact, and he is about to find out what that is, and then some.