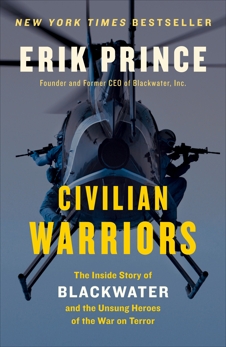 Civilian Warriors: The Inside Story of Blackwater and the Unsung Heroes of the War on Terror

Synopsis: No company in our time has been as mysterious or as controversial as Blackwater. Founded by former Navy SEAL Erik Prince in 1997, it recruited special forces veterans and others with the skills and courage to take on the riskiest security jobs in the world. As its reputation grew, government demand for its services escalated, and Blackwater's men eventually completed nearly one hundred thousand missions in Iraq and Afghanistan. Both the Bush and Obama administrations found the company indispensible. It sounds like a classic startup success story, except for one problem: Blackwater has been demonized around the world. From uninformed news coverage to grossly distorted fictional portrayals, Blackwater employees have been smeared as mercenaries, profiteers, jackbooted thugs, and worse. Because of the secrecy requirements of Blackwater's contracts with the Pentagon, the State Department, and the CIA, Prince was unable to speak out when his company's opponents spread false information. But now he's able to tell the full and often shocking story of Blackwater's rise and fall. In Civilian Warriors, Prince pulls no punches and spares no details. He explains his original goal of building an elite center for military and law enforcement training. He recounts how the company shifted gears after 9/11. He honors our troops while challenging the Pentagon's top leadership. And he reveals why highly efficient private military contractors have been essential to running our armed forces, since long before Blackwater came along. Above all, Prince debunks myths about Blackwater that spread while he was forced to remain silent-myths that tarnished the memory of men who gave their lives for their country but never got the recognition they deserved.

He reveals new information about some of the biggest controversies of the War on Terror, including:

• The true story of the Nisour Square massacre in Baghdad.
• The actual details of Blackwater's so-called impunity in Iraq.
• The events leading up to the televised deaths of Blackwater contractors in Fallujah.

Prince doesn't pretend to be perfect, and he doesn't hide the sometimes painful details of his private life. But he has done a great public service by setting the record straight. His book reads like a thriller but is too improbable to be fiction.