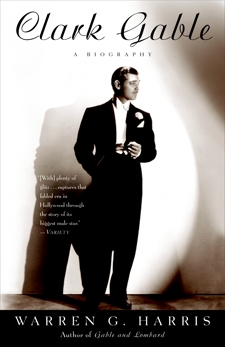 Synopsis: Clark Gable arrived in Hollywood after a rough-and-tumble youth, and his breezy, big-boned, everyman persona quickly made him the town’s king. He was a gambler among gamblers, a heavy drinker in the days when everyone drank seemingly all the time, and a lover to legions of the most attractive women in the most glamorous business in the world, including the great love of his life, Carole Lombard.

In this well-researched and revealing biography, Warren G. Harris gives an exceptionally acute portrait of one of the most memorable actors in the history of motion pictures—whose intimates included such legends as Marilyn Monroe, Joan Crawford, Loretta Young, David O. Selznick, Jean Harlow, Judy Garland, Lana Turner, Spencer Tracy, and Grace Kelly—as well as a vivid sense of the glamour and excess of mid-century Hollywood.