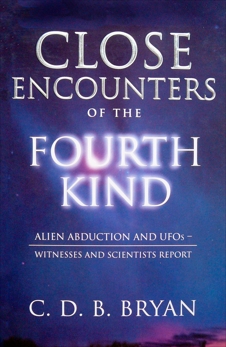 Close Encounters Of The Fourth Kind: Alien Abduction, UFOs, and the Conference at M.I.T.

Synopsis: Close Encounters of the Fourth Kind: cases in which personal contact between an individual or individuals is initiated by the “occupants” of the spacecraft. Such contact may involve the transportation of the individual from his or her terrestrial surroundings into the spacecraft, where the individual is communicated with and/or subjected to an examination before being returned.

One might expect that a “scientific conference” devoted to people who have reported being kidnapped by “little green men” would be dismissed out of hand. But C.D.B. Bryan, the greatly admired journalist and author of Friendly Fire, did not dismiss it: the conference was to be held at the Massachusetts Institute of Technology and would have as its chairmen a Pulitzer Prize-winning Harvard psychiatry professor and a professor of physics from M.I.T.

Bryan attended the conference throughout its five days. He approached the subject with no prior stand, no agenda, and an open (if slightly skeptical) mind.

As the conference progressed, he was astonished by the quality of the stories told by the hundreds of men and women who came forward hesitantly and reluctantly with their utterly amazing—and utterly convincing—accounts of having been abducted and then examined aboard extraterrestrial spacecraft by spindly limbed, telepathic gray creatures with outsized foreheads dominated by huge, compelling, tear-shaped black eyes.

What most astonished Bryan were the similarities found again and again in these accounts and the consistency of their details. It is here that the heart of the mystery lies: as the Harvard professor John E. Mack asked at the conference, “If what the abductees are saying isn’t happening to them, then what is?”

This question—and the possible answers—are at the center of this richly explicit, serious, and riveting book.

Bryan recreates the conference. He interviews ufology’s most prominent psychiatrists, psychologists, hypnotherapists, researchers, physicists, physicians, and folklorists. He interweaves throughout the testimony of the abductees themselves, who tell us their stories in chilling detail.

He presents, in depth, the Close Encounter experiences of two women whose stories he tells on the basis of both their spontaneous recollections of the events and their memories that were retrieved through sessions of hypnosis of which Bryan himself was a witness.

Finally, Bryan examines the current theories—psychological, psychiatric, medical, parapsychological—that have been put forward by the unconvinced to explain the abduction phenomenon. Are the abductees suffering from some sort of false memory syndrome? . . . a multiple or dissociative personality disorder? . . . Are they fantasy-prone?

Close Encounters of the Fourth Kind is a detailed, objective exploration—the most concrete to date—of one of the enduring and amazing mysteries of our time. It is a book that will equally fascinate believers and nonbelievers.