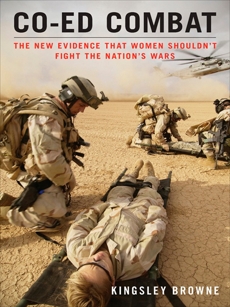 Synopsis: A scholar makes a definitive, controversial argument against women in combat

More than 155,000 female troops have been deployed to Iraq and Afghanistan since 2002. And more than seventy of those women have died. While that’s a small fraction of all American casualties, those deaths exceed the number of military women who died in Korea, Vietnam, and the Gulf War combined.

Clearly, women in combat isn’t a theoretical issue anymore. Women now fly combat aircraft and serve on warships. Even the remaining all-male corners of the military are blurring the lines in Iraq. And for many advocates, this trend is considered progress—toward a better, “gender neutral” military.

Co-ed Combat makes the opposite case, based on research in anthropology, biology, history, psychology, sociology, and law, as well as military memoirs. It asks hard questions that challenge the assumptions of feminists.For instance:
This is a controversial book, likely to draw a passionate response from both conservatives and liberals.