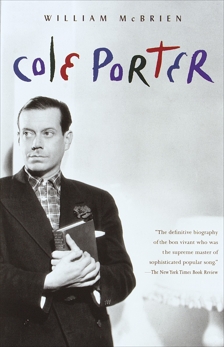 Synopsis: In his life and in his music, Cole Porter was the top—the pinnacle of wit and sophistication. From the 1910s through the ‘50s, from Yale pep rallies through the Broadway triumphs of Anything Goes and Kiss Me, Kate, he delighted audiences with a glittering torrent of song: “I Get a Kick Out of You.” “Night and Day,” “Love for Sale,” and “Just One of Those Things.” The bright surface of these gems—their catchy melodies and ingenious lyrics—made them instant pop hits. Their more subtle qualities and their musical and emotional depth have made them lasting standards, among the greatest glories of the American songbook.

In Cole Porter, William McBrien has thoroughly captured the creator of these songs, whose life was one not only of wealth and privilege but also of tragedy, secrecy, and courage. A prodigal young man, Porter found his aesthetic and emotional anchor in a long, loving, if sexless marriage, while continuing to maintain many discreet affairs with men. In 1937, at the height of his success, he suffered a near-fatal riding accident; his last eighteen years were marked by pain, drugs, and repeated operations on his legs, years of physical agony but unstinting artistic achievement. Here is the book that Porter’s fans have long hoped for—a life that informs the great music and lyrics though illuminating glimpses of the hidden, complicated, private man.