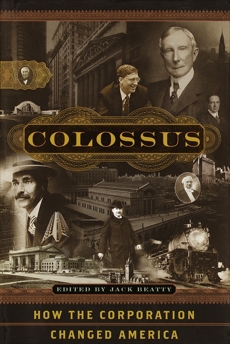 Colossus: How the Corporation Changed America

Synopsis: Big business has been the lever of big change over time in American life, change in economy, society, politics, and the envelope of existence--in work, mores, language, consciousness, and the pace and bite of time. Such is the pattern revealed by this historical mosaic.
--From the Preface

Weaving historical source material with his own incisive analysis, Jack Beatty traces the rise of the American corporation, from its beginnings in the 17th century through today, illustrating how it has come to loom colossus-like over the economy, society, culture, and politics. Through an imaginative selection of readings made up of historical and contemporary documents, opinion pieces, reportage, biographies, company histories, and scenes from literature, all introduced and explicated by Beatty, Colossus makes a convincing case that it is the American corporation that has been, for good and ill, the primary maker and manager of change in modern America. In this anthology, readers are shown how a developing "business civilization" has affected domestic life in America, how labor disputes have embodied a struggle between freedom and fraternity, how corporate leaders have faced the recurring dilemma of balancing fiduciary with social responsibility, and how Silicon Valley and Wall Street have come to dwarf Capitol Hill in pervasiveness of influence. From the slave trade and the transcontinental railroad to the software giants and the multimedia conglomerates, Colossus reveals how the corporation emerged as the foundation of representative government in the United States, as the builder of the young nation's public works, as the conqueror of American space, and as the inexhaustible engine of economic growth from the Civil War to today. At the same time, Colossus gives perspective to the century-old debate over the corporation's place in the good society.

A saga of freedom and domination, success and failure, creativity and conformity, entrepreneurship and monopoly, high purpose and low practice, Colossus is a major historical achievement.