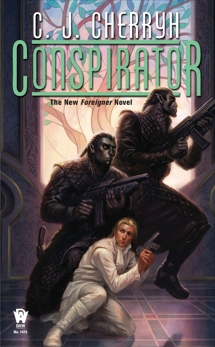 Synopsis: The tenth novel in Cherryh’s Foreigner space opera series, a groundbreaking tale of first contact and its consequences…

The civil war among the alien atevi has ended. Tabini-aiji, powerful ruler of the Western Association, along with Cajeiri, his son and heir, and his human paidhi, Bren Cameron, have returned to Bujavid, their seat of power. But factions that remain loyal to the opposition are still present, and the danger these rebels pose is far from over. Since the rebellion, Bren Cameron's apartment in the capital has been occupied by an old noble family from the Southern district—the same district from which the coup was initiated. This family now claims loyalty to Tabini, but the aiji is dubious. To avoid conflict, Bren has decided to absent himself from the Bujavid and visit Najida, his country estate on the west coast.

Tabini-aiji is training his young son in the traditional ways of the atevi, and has Cajeiri under strict supervision. But after two years in space, surrounded by human children, Cajeiri bristles in this boring environment. Desperate for freedom and adventure, disregarding the obvious danger, Cajeiri escapes the Bujavid with his young bodyguards and sets out to join Bren on the coast.

Determined to insure his son's safety, Tabini recalls Ilisidi from her home in the East, asking her to find Cajeiri and secure him at Bren's estate. But it has been a long time since Bren has been to Najida, and the war has shifted allegiances in many quarters. A district that was once considered a safe haven may now be a trap. And with Bren, Cajeiri, and Ilisidi all under one roof and separated from their allies, that trap is now baited.

The long-running Foreigner series can also be enjoyed by more casual genre readers in sub-trilogy installments. Conspirator is the 10th Foreigner novel, and the 1st book in the fourth subtrilogy.