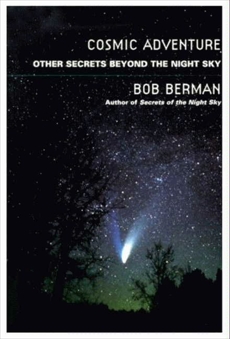 Cosmic Adventure: Other Secrets Beyond the Night Sky

Have you ever wondered what happened before the Big Bang, or how we would colonize Mars, or what an alien invasion might really be like? Astronomer Bob Berman has, and in Cosmic Adventure, a collection of twenty-six profound to outrageous essays, he takes readers on a mind-bending tour of the universe, including our own planet Earth. From the most extraordinary cosmic phenomena to the basics of the natural world, Berman challenges us to look at the facts, discoveries, concepts, and awesome wonders of our cosmos in a new light. Written in entertaining, jargon-free language that even a novice stargazer will understand, Cosmic Adventure is a fun-filled, thought-provoking exploration of the secrets beyond the night sky.

Bob Berman takes you on a stellar journey in this collection of twenty-five essays that display a lively mix of science, astounding facts, personal anecdotes, and sheer playfulness. Complex, mind-stretching scientific topics become understandable in human terms as Berman links astronomy to our lives. He explores strange new mysteries raised by recent discoveries, and covers areas that haven't been discussed anywhere else before. From the "night terrors" that have haunted humankind since time immemorial to the penniless eccentric who sleeps inside the revolutionary telescope he designed, Berman's scope ranges far and wide.

Cosmic Adventure explains aspects of the physical world that have often piqued our curiosity. Who gets to name the stars? What would an alien invasion really be like? What's the inside story behind space program disasters? Why was the early Hubble goof avoidable? What's the only original idea in recent science? Why does time probably not exist at all?