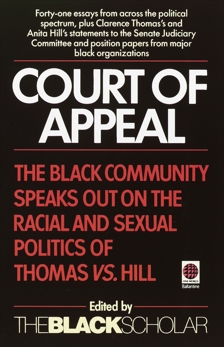 Court of Appeal: The Black Community Speaks Out on the Racial and

Synopsis: Forty-one essays from across the political spectrum, plus Clarence Thomas’s and Anita Hill’s statements to the Senate Judiciary Committee and position papers from major black organizations

Despite the intense media coverage of the confirmation hearings of Supreme Court Justice Clarence Thomas, one aspect seemed continually sidestepped: the response of African Americans to this televised investigation of race, gender, sexuality, and, especially, the black psyche and intra-racial politics. When the dust settled, and Thomas was confirmed, what did it mean for the black community?

This provocative collection examines such issues as how African Americans perceive their interests; the disturbing sexual backlash against Professor Hill and what it says about the position of black females; the inability of some members of the Judiciary Committee to comprehend the nature of sexual harassment; the continuing confusion and fixation of white America on black sexuality; and the character, goals, and values of the new generation of post-civil-rights blacks.

Representing voices from arch conservatives to liberals to radicals, this books reaffirms that the black community is the final “court of appeal” in this great debate.