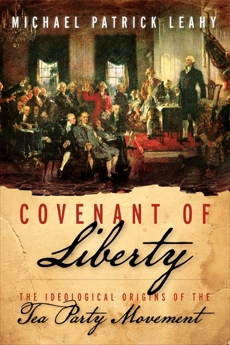 Covenant of Liberty: The Ideological Origins of the Tea Party Movement

Today's political class—in both parties and at all levels of government—shows a blatant disregard for both the letter and spirit of the U.S. Constitution. More and more Americans are fed up, and from this sweeping sense of discontent and anger the Tea Party movement has emerged, revitalizing the spirit of constitutionalist activism in the conservative world.

According to author and Tea Party activist Michael Patrick Leahy, a similar lack of accountability ignited our nation's Founding Fathers, and they were motivated by the same ideological desires: to constitutionally limit government, ensure fiscal responsibility, and defend individual liberty. These imperatives were at the heart of what he calls a "covenant of liberty," which undergirds our written Constitution. Leahy traces these ideas to the libertarian traditions of the English Civil War. He explains why they were on the minds of Americans at the birth of the republic, and how they passed down largely intact from generation to generation, were broken by a corrupted political class, and have been rediscovered by the modern Tea Party movement.

According to Leahy, the American constitutional covenant consists of four unwritten promises that most citizens continue to regard as crucial to our government's legitimacy. The story of how this covenant evolved and how its fundamental promises were broken forms the core of this unique and original work of political history.

As Leahy shows, the first promise—to abide by the written words of the Constitution—was broken before the ink was dry on the nation's founding documents. The second—to refrain from interfering in private economic matters—was broken by the Republican Party in the 1860s. The third—to honor the customs, traditions, and principles that made up the "fiscal constitution"—was broken by Herbert Hoover 143 years after the establishment of our republic, a sad rupture conducted on an even grander scale by his successors, beginning with Franklin Roosevelt and continuing through the administration of Barack Obama.

The breaking of these promises greatly accelerated the natural tendency of governments to centralize and consolidate power at the expense of individual liberty. Had not the fourth and final promise—that members of the legislative branch would exercise thoughtful deliberation while giving respectful consideration to the views of their constituents—been broken in such a disdainful and audacious manner in early 2009, the grassroots activists who came to make up the Tea Party would never have been impelled to take action.

Drawing on his personal experience as the organizer of the online conservative community that launched the Tea Party movement in February 2009, Leahy documents how the timeless principles of American constitutionalism have been used to grow one of the most active and influential movements in American history.