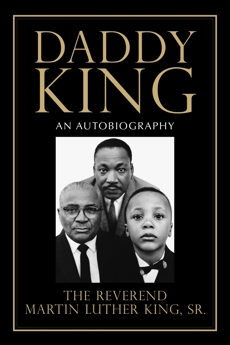 Synopsis: From growing up amidst poverty and racism to preaching from the Ebenezer pulpit for forty years, King, Sr., reveals his life inside the civil rights movement—illustrating the profound influence he had on his son

Born in 1899 to a family of sharecroppers in Stockbridge, Georgia, Martin Luther King, Sr., came of age under the looming threat of violence at the hands of white landowners. Growing up, he witnessed his family being crushed by the weight of poverty and racism, and escaped to Atlanta to answer the calling to become a preacher. Before engaging in acts of political dissent or preaching at Ebenezer Baptist Church, where he would remain for more than four decades, King, Sr., earned high school and college diplomas while working double shifts as a truck driver—and he won the heart of his future wife, Alberta “Bunch” Williams.

In Daddy King, King, Sr., recalls the struggles and joys of his journey: the pain of leaving his parents and seven siblings on the family farm; the triumph of winning voting rights for blacks in Atlanta; and the feelings of fatherly pride and anxiety as he watched his son put his life in danger. Originally published in 1980, it is an unexpected and poignant memoir from an early and legendary figure in the civil rights movement.