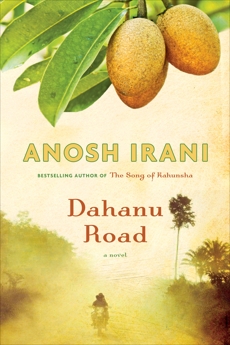 “The only statement of revolt the poor could make was to put an end to their own misery. It happened all the time—men lay themselves on train tracks, hanged themselves from trees, consumed rat poison, and women set their kerosene-soaked bodies alight in front of their husbands. These were blazing ends to insignificant journeys. But in all this, there was always one man who, in that final gush of blood, in that final breaking of neck and bone, set things in motion.”

Zairos Irani, a young man of inherited leisure, is meandering through his family’s lush chickoo orchards near Mumbai when he comes across a distressing sight: Hanging from one of the fruit trees is the lifeless body of Ganpat, a worker from the indigenous Warli tribe. Ganpat’s ancestors once owned the land, before his father’s alcohol debts caused the deed to be transferred to Zairos’s grandfather Shapur. The two family destinies have been entwined ever since, ancient grudges once again awoken by Ganpat’s final desperate act.

Zairos feels obliged to notify Ganpat’s family before the authorities come to ask needless questions and extract bribes. A tractor bearing Ganpat’s sister and anguished daughter Kusum soon trundles into the orchard, and when Kusum alights, Zairos’s curiosity is piqued. As a landowner, he knows that he is well above her station, and yet her dignity and beauty lead him to cast aside taboos and risk the wagging tongues of neighbourhood gossips. Though wary at first, the grieving Kusum comes to return his affection, asking only that he assist her in achieving what her dead father could not- by putting an end to the violence she has endured at the hands of a drunken husband.

Zairos cannot get advice from his father Aspi, whose clownishness masks thinly-veiled nihilism. Nor can he confide in his beloved grandfather Shapur, whose massive hands planted the chickoo trees that he adores as much as his own sons. Shapur built the family empire from a desperate start as an orphaned refugee, and any act that might threaten the delicate legacy spawned by his sacrifices would only provoke rage in the old man, who increasingly dwells in memories. So Zairos whiles away his time at Anna’s, the local haunt for the male leisure class, dreaming of a future with Kusum. There, with the support of some equally underemployed sidekicks, Zairos hatches a scheme to scare Kusum’s husband into releasing her, while keeping his own moral integrity intact. But alas, Zairos’s scheme will not unfold as planned, and along the way he will unwittingly expose family secrets that may well be better left buried…

With brilliant gusto, Irani has built his Dahanu Road upon the pathways forged by authors of tragicomic romance spanning centuries and continents, from the Persian classic Layla and Majnun, to Romeo and Juliet or Wuthering Heights. Dahanu Road is a suspense-filled family saga, a sprawling romantic epic in which the delineations between the oppressor and the oppressed, or between love and hate, are demonstrated to be maddeningly deceptive.