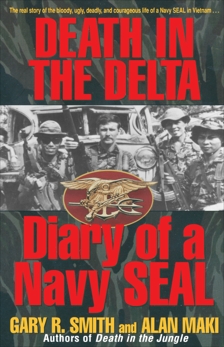 Death in the Delta: Diary of a Navy Seal

Synopsis: Mankind is a predator by nature and a hunter by instinct. I loved to hunt. It was in my blood. And I was now ready to head back to the bush, to hunt the biggest game in the world--man.

With five tours of Vietnam and 257 combat missions under his belt, Navy SEAL Gary R. Smith has witnessed hell itself. DEATH IN THE DELTA covers his third and fourth tours in Nam. From Cam Ranh Bay to Nam Canh to night insertions into Cambodia, he served as SEAL adviser to volatile Vietnamese special forces, including the fierce PRUs (Provincial Reconnaissance Units), Biet Hai, and Regional Forces. Often accompanying their missions, Smith vividly captures the nightmare of a jungle war, whether staging sudden deadly ambushes or sitting silently for hours soaking in mosquito-infested swamps.
It wasn't pretty, but Smith makes no apologies for himself or his fellow warriors in this no-holds-barred account. For him, its a privilege and honor to pass on a small part of the history of the U.S. Navy SEALs experience as he saw it in Vietnam.