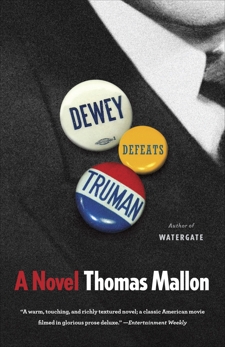 Synopsis: From a writer whose last book, Henry and Clara, prompted John Updike to declare Thomas Mallon one of the most interesting American novelists at work, comes a story that perfectly captures the delightful romance and wistful magic of our recent, and more innocent, past.

Thomas Mallon has masterfully appropriated a jubilant legend (and famous headline) of modern American history -- Harry Truman's upset victory over Thomas E. Dewey in the 1948 presidential election -- and built around it a midwestern Midsummer Night's Dream.

Set in Dewey's hometown of Owosso, Michigan, this is the captivating story of a local love triangle that mirrors the national election contest. As the voters must decide between candidates, so must Anne Macmurray choose between two suitors: an ardent UAW organizer and his polar opposite, a wealthy lawyer who's certain he will ride to state Senate victory on Republican coattails.

As they weave a small-town tapestry of dreams and secrets, the people of Owosso ready themselves for the fame that is bound to shower down upon them after Dewey's "sure thing" victory.  But as the novel -- and history -- move toward election night, we watch the citizens of Owosso, Anne Macmurray and her suitors in particular, await the outcome of the election and the rearrangement of their fates in a climax filled with suspense, chagrin, and unexpected joy.