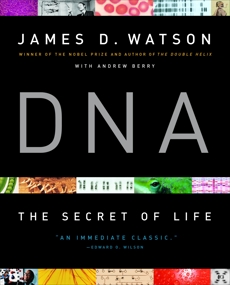 DNA: The Secret of Life

Synopsis: Fifty years ago, James D. Watson, then just twentyfour, helped launch the greatest ongoing scientific quest of our time. Now, with unique authority and sweeping vision, he gives us the first full account of the genetic revolution—from Mendel’s garden to the double helix to the sequencing of the human genome and beyond.
Watson’s lively, panoramic narrative begins with the fanciful speculations of the ancients as to why “like begets like” before skipping ahead to 1866, when an Austrian monk named Gregor Mendel first deduced the basic laws of inheritance. But genetics as we recognize it today—with its capacity, both thrilling and sobering, to manipulate the very essence of living things—came into being only with the rise of molecular investigations culminating in the breakthrough discovery of the structure of DNA, for which Watson shared a Nobel prize in 1962. In the DNA molecule’s graceful curves was the key to a whole new science.

Having shown that the secret of life is chemical, modern genetics has set mankind off on a journey unimaginable just a few decades ago. Watson provides the general reader with clear explanations of molecular processes and emerging technologies. He shows us how DNA continues to alter our understanding of human origins, and of our identities as groups and as individuals. And with the insight of one who has remained close to every advance in research since the double helix, he reveals how genetics has unleashed a wealth of possibilities to alter the human condition—from genetically modified foods to genetically modified babies—and transformed itself from a domain of pure research into one of big business as well. It is a sometimes topsy-turvy world full of great minds and great egos, driven by ambitions to improve the human condition as well as to improve investment portfolios, a world vividly captured in these pages.

Facing a future of choices and social and ethical implications of which we dare not remain uninformed, we could have no better guide than James Watson, who leads us with the same bravura storytelling that made The Double Helix one of the most successful books on science ever published. Infused with a scientist’s awe at nature’s marvels and a humanist’s profound sympathies, DNA is destined to become the classic telling of the defining scientific saga of our age.