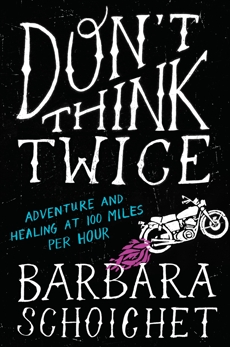 Don't Think Twice: Adventure and Healing at 100 Miles Per Hour

Synopsis: A late-in-life coming-of-age escapade told with humor and heart, Don’t Think Twice is a moving and irreverent account of grief, growing up, and the healing power of adventure.

Within six months, Barbara Schoichet lost everything: her job, her girlfriend of six years, and her mother to pancreatic cancer. Her life stripped bare, and armed with nothing but a death wish and a ton of attitude, Barbara pursues an unlikely method of coping. At the age of fifty she earns her motorcycle license, buys a Harley on eBay from two guys named Dave, and drives it alone from New York to Los Angeles on a circuitous trek loosely guided by her H.O.G. tour book and a whole lot of road whimsy.

On the open highway—where she daily takes her speed to a hundred—Barbara battles physical limitations and inner demons on a journey that flows through the majestic Appalachian Mountains, the enchanting Turquoise Trail, and all along America’s iconic Route 66. She is awed by the battlefields in Gettysburg, stunned by the decadence of Graceland, and amused by a Cadillac graveyard in the middle of nowhere. She meets kind strangers, odd strangers, and a guy who pulls a gun on her for cutting him off. She is vulnerable but sassy, broken but determined to heal . . . or die trying.