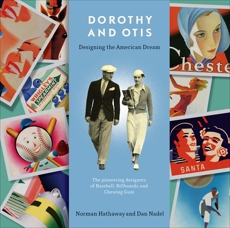 Dorothy and Otis Shepard are the unsung heroes of early twentieth-century North American visual culture. Together, they were the first American graphic designers to work in multiple mediums and scales with equal skill and vision, and their work remains brilliant; yet their names are little known today.

Dorothy and Otis chronicles their story in detail for the first time. It explores the Shepards’ penchant for abstraction and modernism, and shows how the advent of billboard advertising inspired their creativity—large campaigns that matched the grandeur of their lifestyle. Throughout, it demonstrates how their influence touched all aspects of consumer culture—from collaborating on the packaging for Wrigley’s Gum and designing uniforms and logos for the Chicago Cubs to planning and promoting the resort island Catalina, where Stan Laurel, Oliver Hardy, Clark Gable, and other celebrities frequented.

Dorothy and Otis illuminates their personal lives as well, from their origins and early years to the eventual dissolution of their marriage. As it brings to life these pioneering artists and their momentous partnership, it elevates them to their rightful place in popular culture and makes clear how their legendary work reflected and exemplified the American Dream.