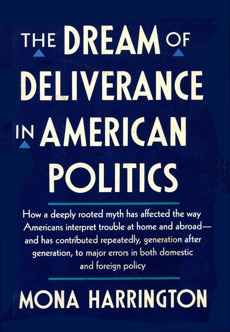 Synopsis: In this major work of historical and political analysis, Mona Harrington examines curcial missteps and uncertainties in the American statecraft from Woodrow Wilson’s time to Ronald Reagan’s, and traces them to a potent myth at the center of our political thinking. It is a myth peculiarly American, a long-held belief that the troubles of society can be traced to some specific “evil”—be it a profiteering in munitions, or the multinational corporation, or the communist conspiracy, or wasteful social programs—and that by smiting the evil we can achieve social well-being for all.

The author demonstrates how deeply this dream of deliverance has been rooted in American culture from the very beginnings of the nation—in the concept of a society in which conflicts between groups of widely divergent interests can be resolved without undeserved loss to any party. We see the consequences of this belief in our continuing tendency to oversimplify issues both domestic and foreign—and in our obsessive expenditure of public energy on the search for and pursuit of the evil to be exorcised. The dilemma is further exacerbated because the country’s three major economic-interest groups—industrial wage earners, industrial owners and managers, and the cluster of interests tied to local economies—are prone to demonologies as widely divergent as their interests, and there can seldom be agreement as to the identity of the evil.

How this bondage to the dream of deliverance has affected the functioning of American government—making our politics a never-ending argument whose terms have scarcely changed over the past century—is brilliant explicated. Connecting the deepest workings of statecraft to what we know about the dynamics of our own individual lives, this highly original book leads us away from a myth-driven politics and toward a difficult encounter with reality, toward liberation from the endless search for the serpent whose defeat with return us to Eden, toward a national recognition that in conditions of conflict it is not always possibly for all to emerge as winners, toward the shaping of a politics that will enable us to allocate in the most decent possible way the losses that we cannot avoid.