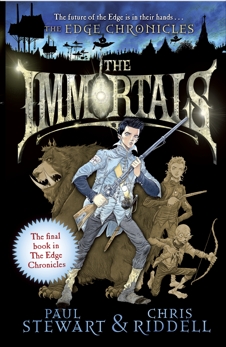 Synopsis: Nate Quarter is a lowly lamplighter in the phraxmines of the Eastern Woods, until treachery forces him to flee for his life to the mighty city of Great Glade.

But these are turbulent times. In far-off Hive, the spectacular city founded by the goblin tribes, the clan leaders are preparing for war. And out beyond the dread Nightwoods, in the fabled gardens of Riverrise, a one-eyed waif jealously guards the life-giving waters of the mystical Riverrise spring. . . .

Swept up in the maelstrom that follows, Nate and a small band of intrepid friends must set off on an epic journey that is to lead them into terrible peril. All the while, from over the Edge cliff itself, a storm unlike any ever seen before, is building. A storm that is to roll across the land, bringing both echoes of the past and promises of a new beginning. . . .

This is the final tale in the Edge Chronicles sequence and it’s a fabulous climax to one of the most original and dramatic fantasy series being written today. Set years in the future, this book is ideal for new readers to discover the series before going back to read the history of Twig, Rook, and Quint.

Illustrated throughout with outstanding inventiveness by Chris Riddell, it will not only enthrall existing fans of the Edge Chronicles but also grip readers new to the series.