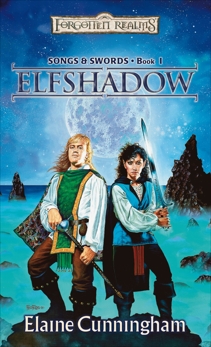 Publisher: Wizards of the Coast Publishing

Synopsis: An undercover agent and a half-elf assassin join forces to bring a killer to justice in this first installment of the Song & Sword series, set in the Forgotten Realms

Silent death stalks the Harpers of Faerûn, a semi-secret society dedicated to preserving justice and peace in the Realms. One by one, the Harpers are falling to the blade of an enigmatic killer—and every victim has associations with Arilyn Moonblade.

A half-elven fighter and Harper agent, Arilyn’s surname derives from the magical sword she wields. But even after she’s tasked with finding the murderer, there are many who believe she is the true culprit. Enter Danilo Thann, a bard who joins Arilyn’s quest after they meet in Waterdeep. Though Danilo may play the fool, he is secretly a capable Harper agent and mage—charged with determining Arilyn’s innocence and uncovering the secrets of her powerful moonblade.

Together, the unlikely duo set out to save the Harpers, embarking on a magical, action-packed adventure that launches an exciting new story in the Forgotten Realms universe.

Elfshadow is also the second book in the Harpers series.