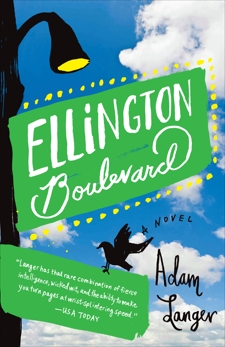 Synopsis: Clarinetist Ike Morphy, his dog Herbie Mann, and a pair of pigeons who roost on his air conditioner are about to be evicted from their apartment on West 106th Street, also known as Duke Ellington Boulevard. Ike has never had a lease, just a handshake agreement with the recently deceased landlord; and now that landlord’s son stands to make a killing on apartment 2B.

Centering on the fate of one apartment before, during, and after the height of New York’s real estate boom, Ellington Boulevard’s characters include the Tenant and His Dog; the Landlord, a recovered alcoholic and womanizer who has newly found Judaism and a wife half his age; the Broker, an out-of-work actor whose new profession finally allows him to afford theater tickets he has no time to use; the Broker’s New Boyfriend, a second-rate actor who composes a musical about the sale of 2B (“Is there no one I can lien on if this boom goes bust?”). There’s also the Buyer, a trusting young editor at a dying cultural magazine, who falls in love with the Tenant; the Buyer’s Husband, a disaffected graduate student taken to writing bawdy faux-academic papers; and the Buyer’s Husband’s Girlfriend, a children’s book writer with a tragic past.

With the humor and poignancy that made Langer’s first novel, Crossing California, a favorite book of the year among critics across the country, Ellington Boulevard is an ode to New York. It’s the story of why people come to a city they can’t afford, take jobs they despise, sacrifice love, find love, and eventually become the people they never thought they’d be—for better and for worse.