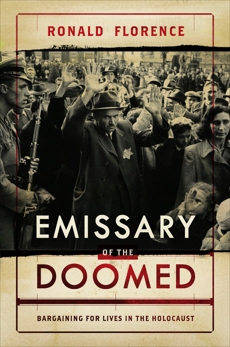 Emissary of the Doomed: Bargaining for Lives in the Holocaust

Synopsis: The official little known WWII story of a desperate attempt to save Hungary's Jewish population

When Nazi troops invaded in March 1944, Hungary contained the largest intact Jewish population in Europe. Until then, stories of Auschwitz and other "resettlement camps" were still treated as unconfirmed rumors inside Hungary and among the Allied powers. With the arrival of Adolf Eichmann-and reports from the first escapees from Auschwitz confirming the most horrifying rumors about the camps-the 850,000 Jews of Hungary faced annihilation.

Emissary of the Doomed is the riveting and heartbreaking account of the heroic attempt to save Hungary's Jewish population. Learning that Eichmann and Himmler were willing to bargain for the lives of as many as one million Jews, Joel Brand and the Jewish rescue committee in Budapest took up the German offer and embarked on a desperate race across Europe and the Middle East to persuade the reluctant Allies to trade funds and matériel for Jewish lives. Against the backdrop of the Normandy invasion, the Soviet advance across Eastern Europe, and the American advances up the Italian peninsula, Brand and his colleagues tried to stop the final push of the Nazis to destroy the Jews of Europe. This untold chapter will appeal to all readers of World War II literature.