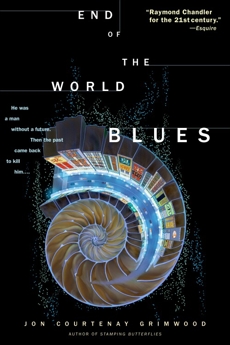 End of the World Blues: A Novel

Synopsis: From Jon Courtenay Grimwood, author of the celebrated Arabesk series, comes a stunningly inventive novel of futuristic noir set in a world of shifting realities. Here a man is drawn into a gritty postmodern subculture and a secret kingdom of otherworldly beings to find what he lost long ago: a reason to live.

Kit Nouveau figured he’d already come to the end of the world. An Iraqi war veteran, expatriate, and part owner of Pirate Mary’s, the best Irish bar in Tokyo, Kit had settled down to await the inevitable with barely a whimper. It wasn’t exactly how Kit thought he’d end up, and he was right.

It’s going to end up a lot worse.

A teenage runaway with fifteen million dollars in stolen cash and a taste for cosplay is about to save Kit’s life in a lethal swirl of scarlet and bridal lace. Lady Neku, a.k.a. Countess of High Strange, has her own dangerous destiny to fulfill and it’s mysteriously connected to Kit’s ravaged past. Now Kit’s only hope for redemption is to save an ex-girlfriend he tragically failed once before. But everyone says it’s already too late. And she’s left behind only one ominous clue: her suicide note.