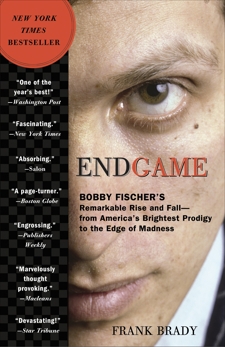 Endgame: Bobby Fischer's Remarkable Rise and Fall - from America's Brightest Prodigy to the Edge of Madness

Synopsis: NEW YORK TIMES BESTSELLER • Who was Bobby Fischer? In this “nuanced perspective of the chess genius” (Los Angeles Times), an acclaimed biographer chronicles his meteoric rise and confounding fall, with an afterword containing newly discovered details about Fischer’s life.

Possessing an IQ of 181 and remarkable powers of concentration, Bobby Fischer memorized hundreds of chess books in several languages, and he was only thirteen when he became the youngest chess master in U.S. history. But his strange behavior started early. In 1972, at the historic Cold War showdown in Reykjavik, Iceland, where he faced Soviet champion Boris Spassky, Fischer made headlines with hundreds of petty demands that nearly ended the competition.

It was merely a prelude to what was to come.

Arriving back in the United States to a hero’s welcome, Bobby was mobbed wherever he went—a figure as exotic and improbable as any American pop culture had yet produced. Commercial sponsorship offers poured in, ultimately topping $10 million—but Bobby demurred. Instead, he began tithing his limited money to an apocalyptic religion and devouring anti-Semitic literature.

Bobby reemerged in 1992 to play Spassky in a multi-million dollar rematch—but when the dust settled, he was a wanted man, transformed into an international fugitive because of his decision to play in Montenegro despite U.S. sanctions. Fearing for his life, traveling with bodyguards, Bobby lived the life of a celebrity fugitive—one drawn increasingly to the bizarre.

Drawing from Fischer family archives, recently released FBI files, and Bobby’s own emails, Endgame  is unique in that it limns Bobby Fischer’s entire life—an odyssey that took the chess champion from an impoverished childhood to the covers of Time, Life and Newsweek to recognition as “the most famous man in the world” to notorious recluse.