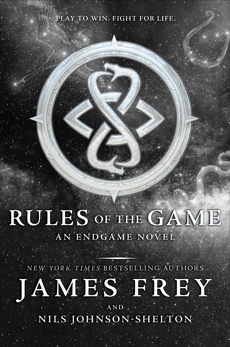 Endgame: Rules of the Game

The explosive final novel in the Endgame trilogy. Two keys have been found. The strongest Players are left. One final key remains to win Endgame and save the world.

For Sarah, Jago, Aisling, Maccabee, Shari, An, and Hilal, Endgame has reached its final phase. The third key, Sun Key, is all that stands between one Player saving their line—or perishing along with the rest of the world. And only one can win.

West Bengal, India: Maccabee is Playing to win. He has Earth Key and Sky Key and he is determined to find Sun Key. But in Endgame, fate can turn in the blink of an eye. He must Play carefully. He must watch his back.

Kolkata, India: An Liu is Playing for death. His goal: stop Endgame, and take the world down with him.

Sikkim, India: For Aisling, Sarah, Jago, Shari, and Hilal, their mission is to stop Endgame. Sun Key must not be found.

No matter what they’re Playing for, all of the remaining Players have one thing in common: they will end the game, but on their own terms.