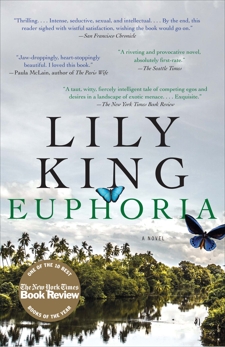 Set in 1930s Papua New Guinea, this gorgeous novel is about three young, ground-breaking anthropologists caught in a love triangle that threatens their bonds, their careers and, ultimately, their lives

English anthropologist Andrew Bankson has been alone in the field for several years studying the Kiona river tribe in the Territory of New Guinea. Haunted by the memory of his brothers' deaths and increasingly frustrated and isolated by his research, Bankson is on the verge of suicide when a chance encounter with two colleagues, the controversial Nell Stone and her wry and mercurial Australian husband, Fen, pulls him back from the brink. Nell and Fen have just fled the bloodthirsty Mumbanyo and, in spite of Nell's poor health, are hungry for a new discovery. When Bankson finds them a new tribe to divert them from leaving New Guinea, he ignites an intellectual and romantic firestorm between the three of them that burns out of anyone's control.

King's writing is effortlessly elegant and the setting wonderfully rich and evocative. What really sets this novel apart, though, are the brilliantly realized characters absorbed in the work of understanding the fundamental humanity that connects us all. Set between two world wars and inspired by events in the life of revolutionary anthropologist Margaret Mead, Euphoria is an enthralling story of passion, possession, exploration and sacrifice.