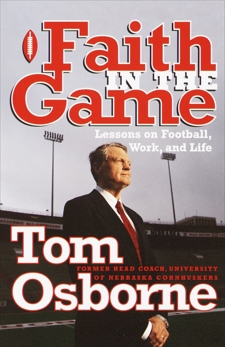 Faith in the Game: Lessons on Football, Work, and Life

Synopsis: As head coach of the University of Nebraska Cornhuskers for twenty-five years, Tom Osborne had one of the most impressive records in college football. Before retiring in 1997, he took his team to a bowl game every year, won three national championships in the last four years he coached, and ended his career boasting an almost unheard of 84 percent winning record. But while these numbers testify to an undeniable accomplishment, it has been another, more powerful force that has shaped Tom's life: his faith.

In Faith in the Game, this legendary coach shares the philosophy he used to create not only a champion football team but also a meaningful life. Both a memoir of Osborne's career with the Cornhuskers and an inspirational guide to making the most out of life by cultivating core values like honesty, courage, and loyalty, Faith in the Game presents the traits Osborne helped to instill in his team--traits that helped the Cornhuskers achieve their spectacular level of success. Osborne focuses on the aspects of character that he has emphasized in his work on and off the field, illustrated with compelling behind-the-scenes stories of the Nebraska football team. Conveyed with his own captivating integrity, Osborne's message reveals the value of hard work, the importance of finding a balance between our professional and personal obligations, and, above all, the importance of bringing faith into our lives to help us through times of crisis.

Tom Osborne is beloved not only for his outstanding record but also for the commitment and dedication he has always shown to his players and coaching staff as a mentor, coach, and friend. His ability to motivate a team has come not with last-minute pep talks but through a focus on consistency and strength of character. "Winning," as he writes in Faith in the Game, "is a by-product of sound preparation."

For those seeking a spiritually centered approach to living and working, this candid account of Tom Osborne's faith and strength is a warm and authentic book from which all of us can learn.