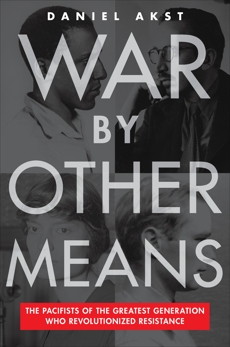 Synopsis: Pacifists who fought against the Second World War faced insurmountable odds—but their resistance, philosophy, and strategies fostered a tradition of activism that shaped America right up to the present day.

In this provocative and deeply researched work of history, Akst takes readers into the wild, heady, and uncertain times of America on the brink of a world war, following four fascinating resisters -- four figures who would subsequently become famous political thinkers and activists -- and their daring exploits: David Dellinger, Dorothy Day, Dwight MacDonald, and Bayard Rustin. The lives of these diverse anti-war advocates--a principled and passionate seminary student, a Catholic anarchist, a high-brow intellectual leftist, and an African-American pacifist and agitator--create the perfect prism through which to see World War II from a new angle, that of the opposition, as well as to show how great and lasting their achievements were.

The resisters did not stop the war, of course, but their impact would be felt for decades. Many of them went on to lead the civil-rights and anti-Vietnam War movements, the two most important social stands of the second half of the twentieth century. The various World War II resisters pioneered non-violent protest in America, popularized Gandhian principles, and desegregated the first prison mess halls. Theirs is a story that has never been told.