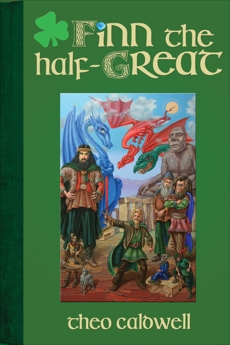 Synopsis: The story of a time when giants roamed the earth.

Finn the half-Great, Theo Caldwell’s first novel for young adults, tells the story of Ireland’s most beloved heroes with humor and heart. Finn McCool, at fourteen feet, thinks he is the tallest thing in the Emerald Isle. That is, until he ventures outside his childhood valley. Finn soon discovers that ancient Britain is a land of giants, dragons, wizards, and men, in which he is only one little fellow.

Despite treating those about him as decently as he can, Finn finds he has enemies all over. Even before he was born, cruel creatures known as the Frost Giants killed Finn’s father and tried to do away with his mother. When Finn learns what befell his parents, his first order of business is to seek out the Frost Giants and take revenge.

In later years, Finn becomes a calmer chap, living in idle bliss on his hill, known as Knockmany, with his beloved wife, Oonagh. But Finn the half-Great’s troubles are not over. Ireland and all of Britain are being overrun by mortal men, who have no patience for bigger fellows like Finn. When Knockmany is attacked by humans, and Oonagh is kidnapped by their leader, Finn sets out to rally Britain’s remaining giants and bring her back.

Steeped in legend, Finn the half-Great is completely thrilling as it introduces an unforgettable character and adventures both ancient and new.