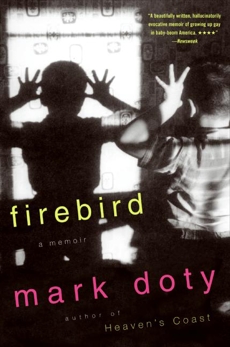 In his powerful autobiography, Firebird, Mark Doty tells the story of a ten-year-old in a top hat, cane, and red chiffon scarf, interrupted while belting out Judy Garland's "Get Happy" by his alarmed mother at the bedroom door, exclaiming, "Son, you're a boy!"

Firebird presents us with a heroic little boy who has quite enough worries without discovering that his dawning sexuality is the Wrong One. A self-confessed "chubby smart bookish sissy with glasses and a Southern accent," Doty grew up on the move, the family following his father's engineering work across America-from Tennessee to Arizona, Florida to California. A lyrical, heartbreaking comedy of one family's dissolution through the corrosive powers of alcohol, sorrow, and thwarted desire, Firebird is also a wry evocation of childhood's pleasures and terrors, a comic tour of American suburban life, and a testament to the transformative power of art.