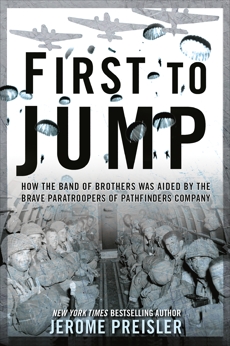 First to Jump: How the Band of Brothers was Aided by the Brave Paratroopers of Pathfinders Company

Synopsis: The U.S. Army Pathfinders. The vanguard of the Allied forces in World War II Europe. Countless times they preceded invasions and battles vital to bringing the enemy to its knees.

Because before the front lines could move forward, the Pathfinders had to move behind enemy lines . . .

The first into combat, and the last out, their advance jumps into enemy territory were considered suicide missions by those who sent them into action. World War Two’s special operations commandos, they relied on their stealth, expert prowess, and matchless courage and audacity to set the stage for airborne drops and glider landings throughout Europe.

They were born of hard necessity. After the invasion of Sicily almost ended in disaster, General Jim Gavin was determined to form an all-new unit of specialized soldiers who would jump ahead of the airborne forces—including the now legendary Easy Company—without any additional support, stealing across enemy terrain to scout and mark out drop zones with a unique array of homing equipment.

Sporting Mohawk haircuts, war paint, and an attitude of brash confidence, they were the best of the best. Their heroic feats behind the lines were critical to nearly all of the Allies’ major victories from Normandy to snowy Bastogne—where they saved the day for thousands of besieged American troops in an operation almost forgotten by history—to the attack on the Ruhr River in Germany.

This is the story of the U.S. Army Pathfinders—their training, bonding, and battlefield exploits—told from the perspectives of the daring men who jumped and the equally bold transport crews who risked everything to fly them into action.