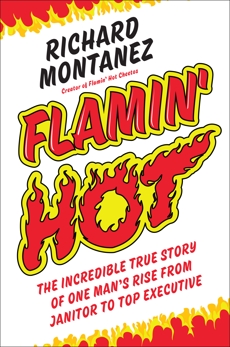 Flamin' Hot: The Incredible True Story of One Man's Rise from Janitor to Top Executive

Synopsis: Act like an owner--even if you work on the ground floor--and huge opportunities will present themselves to you.

The cult favorite snack Flamin' Hot Cheetos would never have existed save for the entrepreneurial thinking of a Frito-Lay janitor named Richard Montañez. He snuck a garbage bag full of plain Cheetos home, and, armed with a vision to share his Mexican culture with the world, seasoned them with his wife's secret recipe for chili sauce. After an intense process of experimenting and testing--and an incredibly risky call to the company's CEO, breaking with protocol--Richard launched Flamin' Hot Cheetos. His product soon became a billion-dollar phenomenon that changed Frito-Lay and the entire food industry forever. Richard's break with protocol sent shock waves through the rigid corporate structure, where most people stayed in their own lane.

In Flamin' Hot, Richard distills what he's learned over a wildly successful career about finding hidden chances to advance in dead-end jobs, offering practical steps anyone can use to advocate for themselves and get ahead. The secret, he found, is to act like an owner--even if you're an entry-level employee. Through stories of Richard's journey from a migrant labor camp in Southern California to the executive office of Frito-Lay, Richard teaches readers to:

•      See opportunities that everyone (including their boss) is missing by using the "What if? What then?" method
•      Pitch their idea to a skeptical room of decision-makers using his powerful storytelling formula
•      Fight back strategically when jealous coworkers try to derail their success
•      Save time and emotional energy by influencing the people that matter, rather than trying to please everyone

Flamin' Hot provides hope that present circumstances don't have to dictate the future, carving a new path to the American Dream for anyone without connections, education, or money.