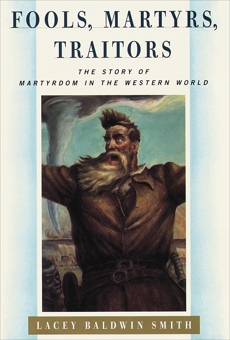 Fools, Martyrs, Traitors: The Story of Martyrdom in the Western World

Synopsis: In this engrossing exploration of martyrdom, Lacey Baldwin Smith takes us on a riveting journey through history as he examines one of the most baffling characteristics of the human species: its willingness to die to sanctify a deity, to defend a cause, or simply to prove a point. In telling the stories of his chosen martyrs, by delving into their psyches, politics, and remarkable personalities, he illuminates the complex and elusive subject of martyrdom as it has evolved over two and a half millennia.

The story starts with Socrates, the Western world's first recorded martyr, and moves on to Judaic and early Christian martyrs: the Maccabees and their heroic suffering; Jesus of Nazareth and the impact of the crucifixion on his message; and Saint Perpetua, who died spectacularly in a Roman amphitheater.

The narrative then transports us to England: to Archbishop Thomas Becket and his sensational murder at the altar of his own cathedral in Canterbury; to Sir Thomas More, who died Henry VIII's "good servant but God's first" ; to the Protestant martyrs under Catholic Mary Tudor; and to Charles I, the only English king to be tried and executed as a traitor.

The concluding chapters cover modern martyrdom as it has become increasingly secularized and entangled with treason. They include John Brown, whose "body lies a-mouldering in the grave but whose soul" goes marching on,  Mahatma Gandhi and his school for martyrs, the Holocaust and its impact on modern Jewish thought, Dietrich Bonhoeffer and the unsuccessful attempts to assassinate Hitler, and Julius and Ethel Rosenberg's execution for giving secret information about the atomic bomb to the USSR. The book ends with the troubling figure of SS Lieutenant Kurt Gerstein and the ultimate question: Is there such a person as a totally disinterested martyr?

Fools and traitors to some, heroes to others, all the men and women who appear here have helped shape our definition of martyrdom. The questions Lacey Baldwin Smith raises, and the way he brings the past to life, make this a uniquely compelling book.