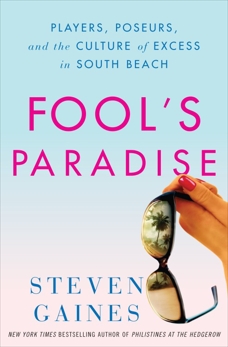 Fool's Paradise: Players, Poseurs, and the Culture of Excess in South Beach

Synopsis: From the acclaimed bestselling author of Philistines at the Hedgerow comes a remarkably revealing profile of the Miami Beach no one knows–a tale of fabulous excess, thwarted power, and rekindled lives that will take its place among the decade’s best works of social portraiture.

Created from a mix of swampland and dredged-up barrier reef, Miami Beach has always been one part drifter-mecca and one part fantasyland, simultaneously a catch basin for con men, fast-talk artists, and shameless self-promoters, and a Shangri-La for sun worshippers and hardcore hedonists. In Miami Beach it’s often said that "if you’re not indicted you’re not invited." But the city’s mad, fascinating complexity resists easy stereotyping.

Fool’s Paradise is more than just a present-day profile of a dark Eden. Gaines journeys back into the city’s social and cultural history, unearthing stories of the resort’s past that are every bit as absorbing–and jaw-dropping–as those of its present. The book begins with a snapshot of the city’s current excess (this is, after all, a sun-washed hamlet that boasts, on a per capita basis, more bars–and breast implants–than any other place in America), then plunges into the Beach’s origins, chronicling the audacious rise of such hoteliers as the Fontainebleau’s Ben Novack and the Eden Roc’s Harry Mufson, the sharp-elbowed tactics of Al Capone and Frank Sinatra, and the Mac-10 shooting sprees of the Marielito and Colombian drug lords.

From there, the narrative shifts to two wildly eccentric souls who gave their lives to preserving the city’s architectural dazzle and creating its color palette, introduces us to "the Most Powerful Man in Miami Beach," and arrives finally in the modern day, where we meet, among others, a kinky German playboy who once owned a quarter of South Beach and publicly flaunts his sexual escapades; a fabulously successful nightclub promoter whose addictive past seems to have given him a portal into the night world’s id; and a gaggle of young sexy models, dreamers, and schemers on a mission to achieve significance.

Evoking the Beach’s surreal blend of flashy Vegas and old Hollywood glamour, as well as its manic desperation and reckless wealth, Gaines persuasively demonstrates that though the Beach is–in the words of its most famous drag queen–"an island of broken toys . . . a place where people get away with things they’d never get away with anyplace else," it casts an irresistible spell.