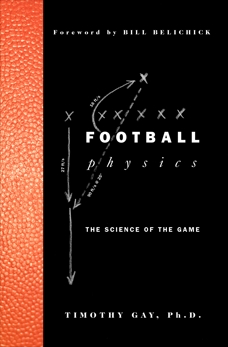 Football Physics: The Science of the Game

Synopsis: You'll never view a football game in quite the same way again--the ultimate guide for the millions of impassioned fans who have turned football into America's most watched sport

What effect does altitude have on the flight of a kicked ball? How do Newton's laws of motion apply to blocking and tackling? What does the science of physics reveal to us about the optimal chase strategies for defensive backs? In this illuminating , enormously entertaining book, a physics professor with a rare gift for making science easy to understand-and fun-for the lay reader reveals the unseen natural laws that govern football. And in so doing, Dr. Timothy Gay broadens and deepens our appreciation for the strategic nuances of this deceptively simple game.

The success of such well received titles as The Physics of Baseball and The Physics of Golf has already demonstrated fans' fascination with the science underlying their favorite sport. But never before have basic physical principles been explained so clearly for sports fans with no scientific background. Readers will relive the game's enthralling moments and legendary feats-Franco Harris's Immaculate Reception, Joe Montana's scrambling pass for The Catch, Dick Butkus's bone-crunching, game-saving tackles, and many more-as they gain new insight into the dynamics of blocking and tackling, open field running, kicking, passing, the line of scrimmage, and the role played by equipment, turf, and the decibels of sound in stadiums.

Illustrated with classic black-and-white NFL action photos along with engaging popular-science diagrams, the book is an outgrowth of Dr. Gay's playful, brilliant lectures on the physics of football that have been adapted by the NFL for videos shown on the TV show Blast! which airs in 190 foreign countries.