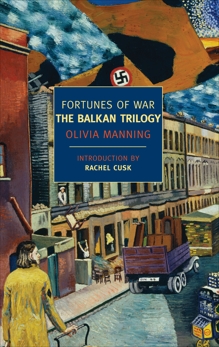 Synopsis: The Balkan Trilogy is the story of a marriage and of a war, a vast, teeming, and complex masterpiece in which Olivia Manning brings the uncertainty and adventure of civilian existence under political and military siege to vibrant life. Manning’s focus is not the battlefield but the café and kitchen, the bedroom and street, the fabric of the everyday world that has been irrevocably changed by war, yet remains unchanged.

At the heart of the trilogy are newlyweds Guy and Harriet Pringle, who arrive in Bucharest—the so-called Paris of the East—in the fall of 1939, just weeks after the German invasion of Poland. Guy, an Englishman teaching at the university, is as wantonly gregarious as his wife is introverted, and Harriet is shocked to discover that she must share her adored husband with a wide circle of friends and acquaintances. Other surprises follow: Romania joins the Axis, and before long German soldiers overrun the capital. The Pringles flee south to Greece, part of a group of refugees made up of White Russians, journalists, con artists, and dignitaries. In Athens, however, the couple will face a new challenge of their own, as great in its way as the still-expanding theater of war.