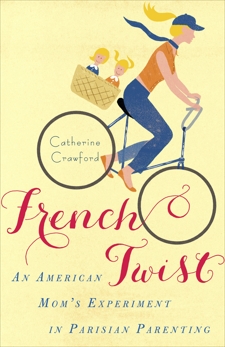 “If there is no blood, don’t get up.” This single nugget of parenting gold, offered by a French friend at the end of a long dinner party, changed everything for writer Catherine Crawford, her husband, and, especially, the couple’s two young daughters. Crawford immediately began to see that while the United States had become the land of too-involved parents forever wanting to talk through their kids’ feelings about, well, everything, France employed a far more laissez-faire attitude toward raising les enfants. Learning to sleep through the night? A few tears never hurt anyone. Food? Let them eat cake, sure, but only after they’ve sampled lamb chops, broccoli rabe, and the stinkiest of cheeses.

Short of shipping her daughters off to Paris for these—and many other—invaluable early-life lessons, Crawford did the next best thing: She brought Old World–style parenting to Brooklyn. In the process, she discovered that her kids could actually hold a thought silently for two minutes without interrupting adult conversation, and that she didn’t, in fact, need to buy out half the toy store to make their birthdays special. She even found out how much her kids like lamb chops! While combining the best attributes of the approach français with what she saw as American qualities worth preserving, Crawford found a way to save her household and her sanity. Hilarious and insightful, French Twist reveals how Crawford and her family survived le grand experiment—and why they aren’t ever going back to the way things were.

“Presented with a touch of humor and spot-on descriptions of childhood (mis)behavior, the advice, which touches on such topics as breastfeeding and school participation, is practical and useful. A refreshing approach to raising children.”—Kirkus Reviews

“[A] charming and clever parenting chronicle . . . Though some may prefer their naughty kids just the way they are, this breezy, entertaining study of parenting a la Paris may prompt others to pour a café au lait and rethink their strategies.”—Publishers Weekly

“French Twist describes an open-minded experiment in French-style parenting (though apparently there’s not even a French word for parenting!) and reveals itself as an honest examination of the author’s own missteps and prejudices—which we all can relate to—and the whole overparenting trend in this country. Are Catherine Crawford’s conclusions ‘French’? Who cares? They’re immensely logical and rational, and delivered with an abundance of love.”—Muffy Mead-Ferro, author of Confessions of a Slacker Mom

“Ever seen a French child throw a tantrum in a restaurant or talk back to his parents? Neither has Catherine Crawford. In French Twist she uncovers the secrets of French child-rearing—and then tries them out on her own family, with remarkable results. Part memoir, part instruction manual, French Twist is hilarious, honest, and incredibly useful.”—Lori Leibovich, executive lifestyle editor of The Huffington Post

“Catherine Crawford has written a great parenting book. I can’t wait to have kids and apply all I have learned here. Wait—hold on. I’m being told I already have two kids. This is incredible news! I will begin applying immediately.”—Adam Scott, actor, Parks and Recreation