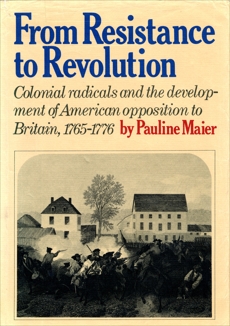 From Resistance to Revolution

Synopsis: Maintaining that the outbreak of revolution in 1775 was not the result of secret planning by radicals but rather the end product of years of painful evolution, Pauline Maier brilliantly traces the American colonists’ road to independence from 1765 to 1776 and examines the role of popular violence as political allegiances corroded and once-loyal subjects were gradually transformed into revolutionaries.

Mrs. Maier presents a view of the American leaders different from that which prevailed a generation ago, when historians saw them as lawless demagogues who, already set upon independence at the outset of the conflict with England, manipulated the public toward their goal through propaganda and mob violence. She shows that none of the men in the forefront of American opposition to British policies favored independence when the colonies blocked England’s efforts to impose a tamp Tax upon them in 1765. Their love of British institutions was undermined gradually and for reasons beyond their opposition to legislation affecting American interest. Developments in England itself, in Ireland, Corsica, and the West Indies also fed American disillusionment with imperial rule, until leading colonists came to believe that just government required casting loose from Britain and monarchy. Indeed, Mrs. Maier demonstrates that participants saw the American Revolution as part of an international struggle between freedom and despotism.

Like independence, violence was a last resort. Arguing that colonial leaders, like many present-day “revolutionaries,” quickly learned that popular violence was counterproductive, Mrs. Maier makes it clear that they organized resistance in part to contain disorder. Building association to discipline opposition, they gradually made self-rule founded upon carefully designed “social compacts” a reality. Out of the struggle with Britain emerged not merely separation, but the beginnings of American republican government.