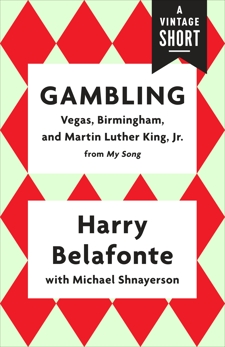 Synopsis: A participant’s portrait of Martin Luther King, Jr. and the Civil Rights Movement, from Harry Belafonte’s memoir of activism and entertainment, My Song.

Birmingham, Alabama in 1963 was one of the most segregated cities in America. It had segregated lunch counters, restrooms, and water fountains. It had a nickname, “Bombingham,” for the homemade bombs detonated by local Klansmen.  And it had Eugene “Bull” Connor, a racist police chief with a hair-trigger temper. It was here that Dr. King and his advisers, Harry Belafonte among them, rolled the dice on an enormous action which would rejuvenate the civil rights movement.

Harry Belafonte is one of America’s greatest entertainers and also one of our most profoundly influential activists. During the 1960s he befriended MLK and began using his celebrity in support of civil rights and other social causes. This is Belafonte’s personal story of fame, performance, and a lasting friendship.  From stages in Vegas to political salons in New York, to the streets of Birmingham and letters from Birmingham Jail, Belafonte gives the reader a unique view of Martin Luther King, Jr. at one of his finest moments.