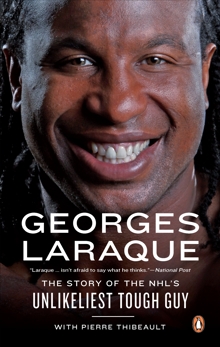 Georges Laraque: The Story Of The NHL's Unlikeliest Tough Guy

Sure, Laraque knows all about the rough side of hockey. The Hockey News named him “best fighter.” Sports Illustrated called him the league’s “#1 enforcer.” Fans called him “BGL”—for Big Georges Laraque. Ottawa Senators’ pugilist Chris Neil called him “probably the toughest in the league.”

Ask Laraque, though, and he’ll say that’s not who he really is.

Known as a player who was unfailingly respectful and gentlemanly even when he was going toe to toe with the toughest guys in the toughest league in the world, he now takes that courageous sense of what is fair into fights that are much more important than the outcome of a hockey game.

The son of Haitian immigrants, Laraque campaigns for World Vision to help Haitian reconstruction and relief. A committed believer in animal rights (and probably the toughest vegan in the world), he is a spokesperson for PETA. A conscientious environmentalist, he stepped up to be the deputy leader of the Green Party of Canada.

In this intimate, often surprising autobiography, Laraque tells the story of a former hockey player whose life is defined by courage and a refusal to compromise. Honest, startling, and brave, this is a portrait of a hockey player unlike any you’ve read before.