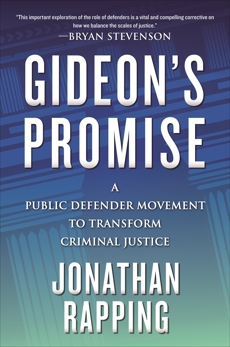 Synopsis: A blueprint for criminal justice reform that lays the foundation for how model public defense programs should work to end mass incarceration.

Combining wisdom drawn from over a dozen years as a public defender and cutting-edge research in the fields of organizational and cultural psychology, Jonathan Rapping proposes a radical cultural shift to a “fiercely client-based ethos” driven by values-based recruitment training, awakening defenders to their role in upholding an unjust status quo, and a renewed pride in the essential role of moral lawyering in a democratic society.

Public defenders represent over 80% of those who interact with the court system, a disproportionate number of whom are poor, non-white citizens who rely on them to navigate the law on their behalf. More often than not, even the most well-meaning of those defenders are over-worked, under-funded, and incentivized to put the interests of judges and politicians above those of their clients in a culture that beats the passion out of talented, driven advocates, and has led to an embarrassingly low standard of justice for those who depend on the promises of Gideon v. Wainwright.

However, rather than arguing for a change in rules that govern the actions of lawyers, judges, and other advocates, Rapping proposes a radical cultural shift to a “fiercely client-based ethos” driven by values-based recruitment and training, awakening defenders to their role in upholding an unjust status quo, and a renewed pride in the essential role of moral lawyering in a democratic society.

Through the story of founding Gideon’s Promise and anecdotes of his time as a defender and teacher, Rapping reanimates the possibility of public defenders serving as a radical bulwark against government oppression and a megaphone to amplify the voices of those they serve.