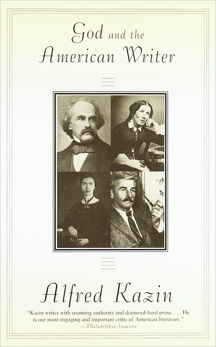 Synopsis: God and the American Writer does more to illuminate the fundamental purposes and motivations of our greatest writers from Hawthorne to Faulkner than any study I have read in the past fifty-five years--that is, since the same author's On Native Grounds.
--Louis S. Auchincloss

This is the culminating work of the finest living critic of American literature.  Alfred Kazin brings a lifetime of thought and reading to the triumphant elucidation of his fascinating and slippery subjects: what the meaning of God has been for American writers, and how those writers, from the New England Calvinists to William Faulkner, have expressed it. In a series of trenchant critical studies of writers as divergent as Hawthorne, Melville, Emerson, Lincoln, Whitman, Dickinson, Twain, William James, Eliot, Frost, and Faulkner, Kazin gives a profound sense of each, and his quotations from their works are artfully chosen to pursue the main theme. The centerpiece of the book is the reflection in American writing of the great American tragedy, the Civil War--so deeply involved in the whole complex issue of religion in America.  An enthralling book by a major writer.

"This is a book about the place of God in the imaginative life of a country that for two centuries countenanced slavery and then engaged in a fratricidal war to end it. For Americans no subject is more compelling or, in its entanglement with the deepest roots of the national soul, more terrible. And no one has ever written as incisively, as movingly, or as unforgivingly about it as Alfred Kazin has here."
--Louis Menand


"In the era of willful obfuscation, Alfred Kazin is the good, clear word, a brilliant scholar and an original reader. His latest book, God and the American Writer, which comes fifty-five years after On Native Grounds, proves he has lost nothing and gives us everything he has."
--David Remnick

"American writers have been born into all sorts of religious sects, but have had to struggle in solitude to make sense of God. Alfred Kazin, a cosmos unto himself, has written brilliantly and affectingly of how a dozen or so of our finest authors--poets, novelists, philosophers, and one president--endured and illuminated that struggle. Kazin is sometimes passionate, even fierce, especially in his discussions of slavery and of his hero (and mine), Abraham Lincoln. But, as ever, Kazin's writing is tempered by an enormous American empathy and by his sense of irony about our country and its spiritual predicaments. Spare, sharp, and immensely learned, God and the American Writer is the most moving volume of criticism yet by our greatest living critic."
--Sean Wilentz