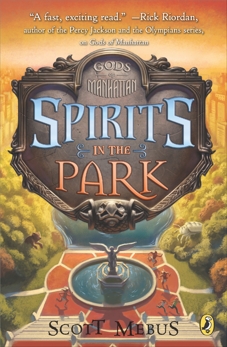 Gods of Manhattan 2: Spirits in the Park

Synopsis: A month has passed since Mannahatta - the spirit city that coexists alongside Manhattan - was revealed to Rory, when an earthquake rocks New York. The island itself is attempting to shake off the Trap around Central Park, and only Rory has the power to open it before even greater catastrophe strikes. But centuries-old wounds must be healed before Rory turns the key. With New York's most notorious figures - including Captain Kidd and Bill the Butcher - at his side and on his trail, Rory discovers that the answer to peace lies with the one man he never wants to see again: his father.