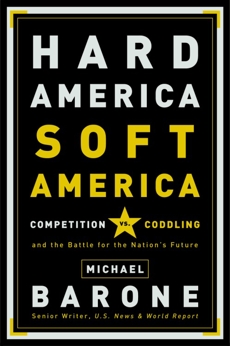 Synopsis: A peculiar feature of our country today, says Michael Barone, is that we seem to produce incompetent eighteen-year-olds but remarkably competent thirty-year-olds. Indeed, American students lag behind their peers in other nations, but America remains on the leading edge economically, scientifically, technologically, and militarily.

The reason for this paradox, explains Barone in this brilliant essay, is that “from ages six to eighteen Americans live mostly in what I call Soft America—the parts of our country where there is little competition and accountability. But from ages eighteen to thirty Americans live mostly in Hard America—the parts of American life subject to competition and accountability.” While Soft America coddles, Hard America plays for keeps.

Educators, for example, protect children from the rigors of testing, ban dodgeball, and promote just about any student who shows up. But most adults quickly figure out that how they do depends on what they produce.

Barone sweeps readers along, showing how we came to the current divide—for things weren’t always this way. In fact, no part of our society is all Hard or all Soft, and the boundary between Hard America and Soft America often moves back and forth. Barone also shows where America is headed—or should be headed. We don’t want to subject kindergartners to the rigors of the Marine Corps or leave old people uncared for. But Soft America lives off the productivity, creativity, and competence of Hard America, and we have the luxury of keeping part of our society Soft only if we keep most of it Hard.

• How the American situation is unique: In Europe, schooling is competitive and demanding, but adult life is Soft, with generous welfare benefits, short work hours, long vacations, and state pensions

• The benefits of Softness: How government programs like Social Security were necessary in what was a harsh and unforgiving America

• Hard America, Soft America is a stunningly original and provocative work of social commentary from one of this country’s most respected political analysts.