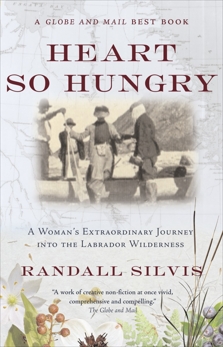 Heart So Hungry: A Woman's Extraordinary Journey into the Labrador Wilderness

Synopsis: A gripping cold weather, true-life adventure, Heart So Hungry tells the story of a race across Labrador and one woman’s determination — inspired by grief and fed by outrage — to set the record straight.

A remarkable adventure, a love story and a thrilling race are all front and centre in this account of how one woman’s devotion to her late husband’s memory transformed Mina Hubbard from a rural Ontario nurse into the most celebrated female explorer of her time.

In 1903, following an ambitious expedition to map the interior of Labrador, Mina’s husband, Leonidas, dies of starvation in a cold, boggy, wind-scoured landscape. Allegations surface that the expedition failed because of Hubbard’s incompetence, so Dillon Wallace, Leonidas’ partner on the failed expedition, decides to honour a promise that he made to Hubbard to complete the route that they had been supposed to take. When Mina Hubbard discovers what Wallace has planned, she doubts his motives and decides to mount her own Labrador expedition and to beat Wallace to the finish line. Driven by her devotion, Mina wins the race, beating Wallace by a month and a half, and becomes in the process the first white woman to make contact with the elusive Naskapis Indians.

Using original, unpublished source material, as well as books written by the main actors in the drama, novelist Randall Silvis pieces together a narrative of the race between Wallace and Mina Hubbard, as well as the fateful first expedition of Wallace and Leonidas Hubbard.