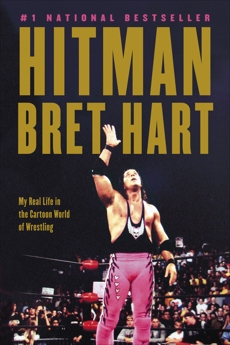 Hitman: My Real Life in the Cartoon World of Wrestling

Synopsis: In his own words, Bret Hart’s honest, perceptive, startling account of his life in and out of the pro wrestling ring.

The sixth-born son of the pro wrestling dynasty founded by Stu Hart and his elegant wife, Helen, Bret Hart is a Canadian icon. As a teenager, he could have been an amateur wrestling Olympic contender, but instead he turned to the family business, climbing into the ring for his dad’s western circuit, Stampede Wrestling. From his early twenties until he retired at 43, Hart kept an audio diary, recording stories of the wrestling life, the relentless travel, the practical jokes, the sex and drugs, and the real rivalries (as opposed to the staged ones). The result is an intimate, no-holds-barred account that will keep readers, not just wrestling fans, riveted.

Hart achieved superstardom in pink tights, and won multiple wrestling belts in multiple territories, for both the WWF (now the WWE) and WCW. But he also paid the price in betrayals (most famously by Vince McMahon, a man he had served loyally); in tragic deaths, including the loss of his brother Owen, who died when a stunt went terribly wrong; and in his own massive stroke, most likely resulting from a concussion he received in the ring, and from which, with the spirit of a true champion, he has battled back.

Widely considered by his peers as one of the business’s best technicians and workers, Hart describes pro wrestling as part dancing, part acting, and part dangerous physical pursuit. He is proud that in all his years in the ring he never seriously hurt a single wrestler, yet did his utmost to deliver to his fans an experience as credible as it was exciting. He also records the incredible toll the business takes on its workhorses: he estimates that twenty or more of the wrestlers he was regularly matched with have died young, weakened by their own coping mechanisms, namely drugs, alcohol, and steroids. That toll included his own brother-in-law, Davey Boy Smith. No one has ever written about wrestling like Bret Hart. No one has ever lived a life like Bret Hart’s.

For as long as I can remember, my world was filled with liars and bullshitters, losers and pretenders, but I also saw the good side of pro wrestling. To me there is something bordering on beautiful about a brotherhood of big tough men who pretended to hurt one another for a living instead of actually doing it. Any idiot can hurt someone.
—from Hitman